1. On my slow return to the normal state of mind I experienced an exquisitely painful longing for something undefinable. During the day I worked as usual and this feeling, though it persisted, was much less pronounced, but when I retired the night, with its monstrous amplifications, made the suffering very acute until it dawned upon me that my torture was due to a consuming desire to see my Mother.
...
Thoughts of her led me to the review of my past life beginning with the earliest impressions of my childhood. Uncovering more and more of my past life I came to review my American experiences. In the meantime my craving had become almost unbearable and every night my pillows were wet from tears. Unable to stand it longer I resolved to quit work and go home. This I did and after a multitude of experiences I found myself in Paris(..) I had to get off some final proofs for one of my lectures before leaving and while doing this a messenger handed me a telegram from my uncle which read: “Your Mother is dying hurry if you want to find her alive.”

- A very rare story told by Nikola Tesla in a letter to a friend. He talks about his mother and her death, his dream and his thoughts on spiritualism.
painting by Arnold Böcklin, Pietà (Mercy). 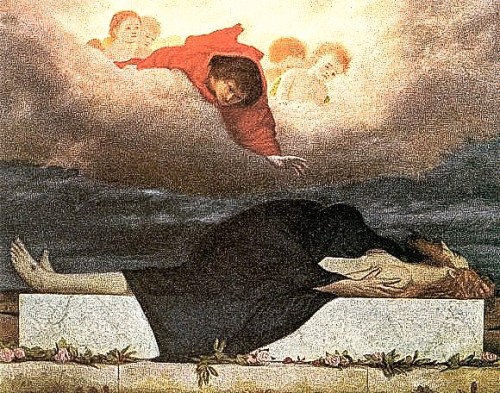 link to the whole letter

2. interesting study on why people are neurotic and short paragraph from the research about how female birds like bad boys but marry to dull boys, or why humans and even animals tend to like prettier/fun partners but build a life with rather dull ones. It also explained evolutionary benefits of being neurotic, which I had to google at one of the sleepless nights to make a use of it. So if you're anything neurotic, use it to your advantage. Any personality traits that you have are there for you to use for your best survival, don't neglect it, flourish it.

" -essentially, females want to make babies with a bird that sings pretty songs but they want to build a nest and care for the babies with often a much duller mate, a mate who is going to be faithful and see the offspring to maturity so they can continue the line. We know from animal research that even highly monogamous species (some birds) cheat on their mates"
https://ubc-emotionlab.ca/2011/12/why-are-people-neurotic/

3. late night thoughts,
as I posted yesterday about how too much or less confidence looks extreme and disturbing,

the thin line in between respecting yourself or knowing your worth and despising yourself is so sensitive that either way you fall to much makes you arrogant.

say you think, "I'm good at this" or "I'm bad at this", you keep pushing the idea to the edges, cus for us, egocentric beings, it's hard to stay in the middle due to feeling of importance and being special. it's actually hard to say "I'm just another human being". which there're ppl that good at it and I respect them. I think genetic big 5 formula would be mid neuroticism and agreeableness. and of course having these self doubts and questionings are healthy as well as long as not extreme.
I personally am not great at it and still training myself. some days I say I'm empty and not good at anything, hence the imposter syndrome. other days i feel like a Greek God or a warrior. Creative ppl usually have more emotional rollercoaster anyway, an engineer wouldn't be that much unsure.
but at the end of a day, what counts is actually "doing" something, finishing a project or product. if you feel like a God, doesn't really help much cus Gods and warriors doesn't like to do anything except drinking wine. that's what I've been doing, and not proud of it. I feel like a waste of potential. I dont like enjoying life without a tangible outcome. I don't like hedonism. even though thats how ppl might perceive me. it's like, you dont always drink cus you love it, you do it cus you're in stagnation.

go and do what you've been planning to do. or maybe don't, cus nothing matters? slippery slope.
everything you do matters. only psychopaths don't care

4. he sat there thinking
didn't have much to say,
while she was leaving.
couldn't make himself believe
let alone someone else